This summer we had a continues stream of hot weather. There is nothing better than an icy cold beer on a hot day!!

ビール (Beer) is also very popular alcoholic drink in Japan. According to research in 2014, beer consumption in Japan was 5,407,000 litters for the year; the 7th highest consumption in the world.

Beer was introduced by the Dutch in the early 17th century during the Edo Period. In 1853, it is said that beer was first tested-brewed in Japan by Koumin Kawamoto, a doctor of Dutch medicine – by following a description in a Dutch book.

Japanese have been making beer since the 1870s and in the early 1900s, beer became more popular. This is when the four major Japanese breweries – Sapporo, Asahi, Suntory and Kirin – emerged.

In Japan they have a strict beer tax and divides it into 3 categories based on the percentage of malt in alcohol.

If there is 67% malt the government defines this as’ beer’. So Japanese brewery companies ‘invented’ a lower malt level called ‘発泡酒’ happoosu (sparkling alcoholic drink) to avoid the tax and provide the people with enjoyable cheaper ‘beer’.

Since it was produced in 1994, the happoshu has been very popular and started taking over the shelves instead of your normal beer.

Then what happened? Alcohol tax revenue in Japan dramatically decreased and Japanese government hanged the beer tax conditions in 1996 which happoushu’s category then become the same as beer.

Brewery companies did not give up. They developed a new type of happoshu that could provide much cheaper beer once again.

It is a cat-and-mouse game between the government and beer companies. Japanese government changed the beer taxation system in 2004 once again, resulting in brewery companies switching development to a new product.

The reason there are 3 types of beers in Japan is because of fighting alcohol tax between government and companies!

In 2009, the four major brewers also began to release non-alcoholic beer due to stricter driving laws. This has also becoming popular. (In Japan if you drink even one drop of alcohol, you cannot drive at all.)

But wait! Do you want to drink ‘non-alcoholic’ alcohol?

How do you enjoy your beer? The feeling of alcohol or the taste of beer? Well, if I am not supposed to drink, I’d rather choose a soft drink! 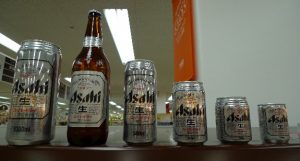