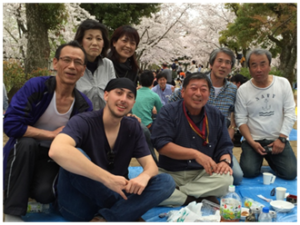 During April I was lucky enough to travel throughout Japan. This also coincided with the famed cherry blossom season! It was my second time travelling through this beautiful and intriguing country. But unlike last time I was armed with basic conversational Japanese! This was going to prove to be a very useful skill!

It all started at Osaka International Airport.

“Sumimasen, Pen o karitemoiidesuka”?
(Excuse me, can I use a pen?)

My first words on Japanese soil!  I hit Mr Ojiisan (old man) up with some classic Genki Book 1.  I had executed a clear and understandable Japanese sentence right off the bat. Unfortunately the gentleman didn’t have a pen but I was directed to an area where I could fill out my Immigration card. But that was ok, more importantly I wanted to get my Japanese off and running straight away! I didn’t want to shy away from speaking the native language. Best just to get stuck in!

I often found myself having conversations with Japanese people on trains.  On one occasion I spoke to a nice lady on a train trip to Nara. She was delightful and I had a long chat mostly in Japanese! She told me about the area and how the building on the 10 Yen coin was in the area. I was also given Sakura flavoured Turkish delight to try!!!
iJapanese skills get you sweets from Obaasan (old lady). 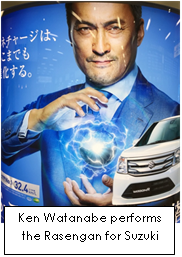 2 years ago I went to a bar in Tokyo with my brother. It was a great night! And was a highlight of my previous trip.  I had decided to visit the same bar 2 years later! Most of the same people were there! I was greeted with AUSTRALIA! It was nice that I was remembered! But what really made the night was how I managed to speak mostly in Japanese this time. Everybody was quite shocked when I just started speaking Japanese. The constant praises of ‘Jyouzu’ (‘great’) and ‘ehhhhhh’ was most encouraging.

iJapanese skills rewards you with looks of admiration.

Be it Subways, JR trains or Shinkansens travelling in Japan is easy! However if by chance I didn’t know what platform to take or I had confusion I could always rely on asking in Japanese.

iJapanese skills gets you going in the right direction.

One day I visited Himeji Jo Castle. And apart from viewing its obvious beauty and the surrounding cheery blossoms which were in full bloom (Mankai). I was invited to do Hanami! Sitting on mats underneath cherry blossoms while snacking on picnic food and drink. Enjoying the company of Kansai people!

In my first week, I based myself in Koshien, Ninshinomiya. It’s an area in between Osaka and Kobe in the Hyogo prefecture. I used Airbnb for most of my accommodation alongside Hostels. I totally recommend it as you have the opportunity of staying with Japanese people! My host couldn’t speak English that well. However that was great because I had the opportunity to use Japanese even more so in the home setting! Saying things like ‘ittekimasu’(I’m leaving) and ‘tadaima’(I’m home) enhanced the Japanese experience. Also watching a film with my host about Romans played by Japanese actors and actresses while sitting on a traditional tatami mat does the trick too. Simply witnessing daily life in the community was special for me. Walking past the local school, stopping by to my local convenience store (Family mart, Lawsons ect) then heading to one of two trains stops located near me was part of my daily routine. After a week I was very familiar with the Hanshin line. Koshien is known for it’s old Baseball stadium. So it was only natural to adopt the Hanshin Tigers Baseball team. Tigers IKEEE (Go Tigers)!

MY FAVOURITE THINGS ABOUT JAPAN