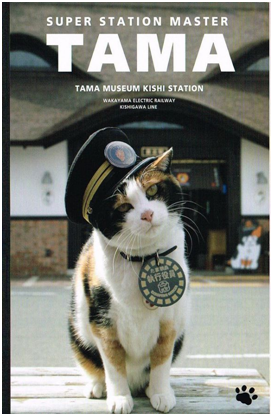 Tama (1999 – 2015), the world’s first cat as a station master, “the only female in a managerial position” of  Wakayama Electric Railway, is the station master and operating officer of Kishi station (貴志駅) on Kishigawa
Line(貴志川線) in Kinokawa(紀の川) Wakayama(和歌山).

Tama was originally a stray cat, born and grown with other fellow stray cats near Kishi station. They were at that time mainly fed by passing passengers and the informal station manager. In 2004, the station faced a financial crisis and was almost shut down by the railway company. Luckily the station was demanded to remain after a citizens vote, but in order to cut cost, Wakayama Electric Railway had to dismiss all staffs on Kishigawa line and to employ local people who do business around the station to look after it.

In January 2007, noticing Tama and the other stray cats’ popularity among passengers, the railway company decided to officially appoint Tama as the station master of Kishi station. Tama’s duty was to greet passengers, and for annual salary, Wakayama electric railway provided Tama cat food  for the year.

Since Tama’s appointment, the station’s passengers have increased rapidly, 17% for the month compared with the same time last year. 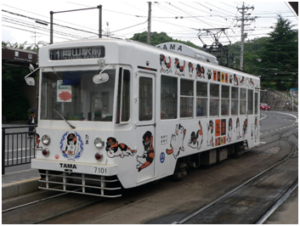 In January 2008, Tama was promoted to “super station master”. Both the president of the company and the mayor attended her inauguration.

In January 2010, Tama was again promoted to “Operating Officer”. A study estimated that the publicity surrounding Tama has contributed 1.1 billion yen
($12 million) to the local economy.

In August 2010, the station was rebuilt into the shape of a cat’s face, in recognition of Tama’s great job and contribution to the area.

In spring 2009, a new “Tama Densha” (たま電車/Tama train) went in operation. The train is designed based on Tama and is decorated with cartoon figures of her.

Sadly Tama passed away on June 22 ,2015 due to apparent heart failure, at the age of 16 (approximately 80 years old, human age). A Shinto-style funeral was conducted  for her by Wakayama Railway Company at the station and she was given the posthumous title of

“Honorable Eternal Stationmaster.”  Tama is enshrined at a nearby Shinto cat shrine as a goddess.

Tama’s job is now succeeded by her official apprentice Nitama (二玉) second tama, who was praised for her “hat wearing” skills.