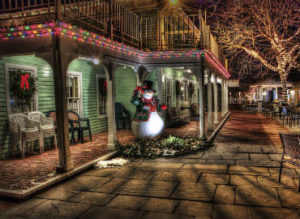 Christmas is just around the corner and is a special day for Japanese people as well.
How do the Japanese celebrate Christmas, you may ask? What is Christmas like in Japan?

Many Western Christmas traditions have been adopted by the Japanese. Christmas trees are placed in homes, gifts are exchanged and people enjoy having Christmas parties.
In Japan, Christmas is known more of a time to spread happiness rather than for its religious celebration. There are several typical Christmas customs and traditions that take place in Japan. The main celebration revolves around Christmas Eve and not Christmas day.  The 25th of December is not a public holiday, just a standard working day and children are at school like any give day during the week.

Most Japanese families would have a Christmas tree (plastic not real) with decorations and now it is becoming very common to have lights on the outside of their homes, as you commonly find in some western countries nowadays. Large buildings, parks and stations are decorated with colourful lights and Christmas trees in front of them.

Children believe Santa Claus will bring presents so they hang up their stocking next to their bed and go to sleep with excitement. The next day, they wake up and find a present of what they had wished for!

composes of chicken (not turkey or ham) and western style foods, such as associated cheese and roast beef or pork, which they don’t normally eat for everyday eating.

Christmas cakes are also popular. They’re not your typical fruitcakes, but sponge cake with frosted whipped cream, often decorated with strawberries and with a little Santa on top.

Christmas Eve is also considered a very romantic day, and couples go out and spend a romantic candle night dinner together and exchange presents. Young couples like going for a walk to look at the places with Christmas lights.

Interesting enough a survey indicates that 70% of people spend Christmas with their family at home during the Christmas time. However, the best way to celebrate Christmas is with their boyfriend or girlfriend at a nice fancy restaurant, if they can afford to do so.

When I was writing the article for the front page, I researched about Christmas in Japan using English websites.  I wanted to know what fundamental aspects were interesting to foreigners about a Japanese Christmas.

Well…………… what I found made me laugh, till I was almost in tears.  It was also little shocking to find what foreigners perceive about our Christmas.
The funniest story was that Japanese children believe in ‘Hotei’, who is a one of Seven Gods of Luck for happiness, who brings Christmas present.
As we know he is the laughing budda but some websites even go so far as to say that Hotei is the Japanese Santa Claus.
Hotei won’t know whether to “HA” or “HO” in Japan! I must admit, there are lots of similarities between Hotei and Santa Claus. Their cheerful face, big belly and both carry a big bag of goodies for children.  Yet in spite of all intents and purposes Japanese people have never thought of them as the same person, we can clearly distinguish between Hotei and Santa.

The more shocking tale was that Japanese people all sit down to KFC at Christmas time!
Not so accurate, the truth is KFC provides a special ‘Christmas Chicken Set’ to take home. The strategic marketing campaign has proven extremely successful with Japanese people as an easy alternative to the traditional roast turkey.
Personally I have never seen people who celebrate Christmas with KFC.